First of all, God (Allah) is eternal. It is clearly mentioned in the Quran:

“Say: He is Allah, the One and Only (God, Lord and creator), ‘Allah-us-Samad’ (The Self-Sufficient Master, Whom all creatures need, He neither eats nor drinks, He is eternal, He is the one who doesn’t have death or end). He neither begets nor is born, And there is none co-equal or comparable unto Him.”-(The Quran 112). 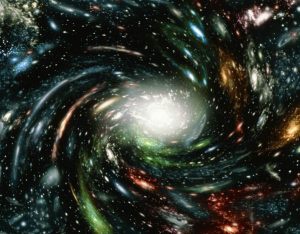 It is also believed that the contracting universe will end in a fierce heat and contraction known as the “Big Crunch.” This would lead to the end of all forms of life as we know them. Renata Kallosh and Andrei Linde, professors of physics from Stanford University, made the following statements on the subject:

The universe may be doomed to collapse and disappear. Everything we see now, and at a much larger distance that we cannot see, will collapse into a point smaller than a proton. Locally, it will be the same as if you were inside a black hole… We have found that some of the best attempts to describe dark energy predict that it will gradually become negative, which will cause the universe to become unstable, then collapse… Physicists have known that dark energy could become negative and the universe could collapse sometime in the very distant future… but now we see that we might be, not in the beginning, but in the middle of the life cycle of our universe.

This is how this scientific hypothesis of the Big Crunch is indicated in the Quran:

The Day when We will fold the heaven like the folding of a [written] sheet for the records. As We began the first creation, We will repeat it. [That is] a promise binding upon Us. Indeed, We will do it.”-(The Quran 21:104).

In another verse, this state of the heavens is described thus:

They have not appraised Allah with true appraisal, while the earth entirely will be [within] His grip on the Day of Resurrection, and the heavens will be folded in His right hand. Exalted is He and high above what they associate with Him.”-(The Quran 39:67).

According to the Big Crunch theory, the universe will begin to collapse slowly and will then increasingly pick up speed. At the end of the process, the universe will have infinite density and be infinitely hot and small. This scientific theory runs parallel to the Quranic explanation of this particular scientific concept.

How To Install WordPress Theme

How to install WordPress in Mac OS

Which platform is better, Upwork or Fiverr.

What does the Bible say about eating pork?

Who is the “We” in the Quran in many verses such...

How to install WordPress in Mac OS

Timings of the 5 daily prayers in Islam